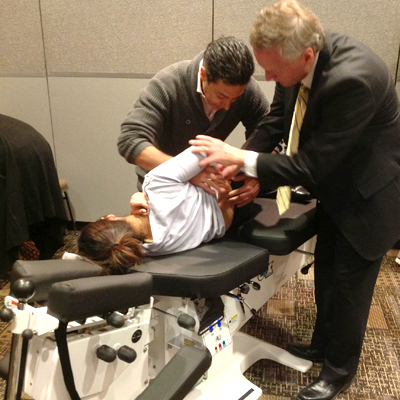 In 1997, he also received his certificate as a “Sports Medical Chiropractor”.

In the period from 2000 to 2002 he completed his master’s degree in “Organizational Human Development” at the University of Celaya.

He is an active member of the College of Chiropractic Scientific Professionals of Mexico.

He has been Vice President of the Mexican Federation of Sports Chiropractic.

He obtained the Certificate of the National University of Health Sciences on April 21, 2013, in “Techniques of Adjustment and Manipulation” from Dr. James M. Cox.

He won a recognition for his participation in September 2013 at the 15TH International interdisciplinary Chiropractic Congress.

In Santo Domingo, Rep. Dominican Republic in October 2009, he achieved the certificate in “Sports Medicine”, by the International Olympic Committee.

In San Juan de Puerto Rico in the year 2000, he obtained a certificate in “Technique of Dr. Cox Part 1”.

Dr. Lucas VanAcker shares a story of an active woman in her sixties with … END_OF_DOCUMENT_TOKEN_TO_BE_REPLACED